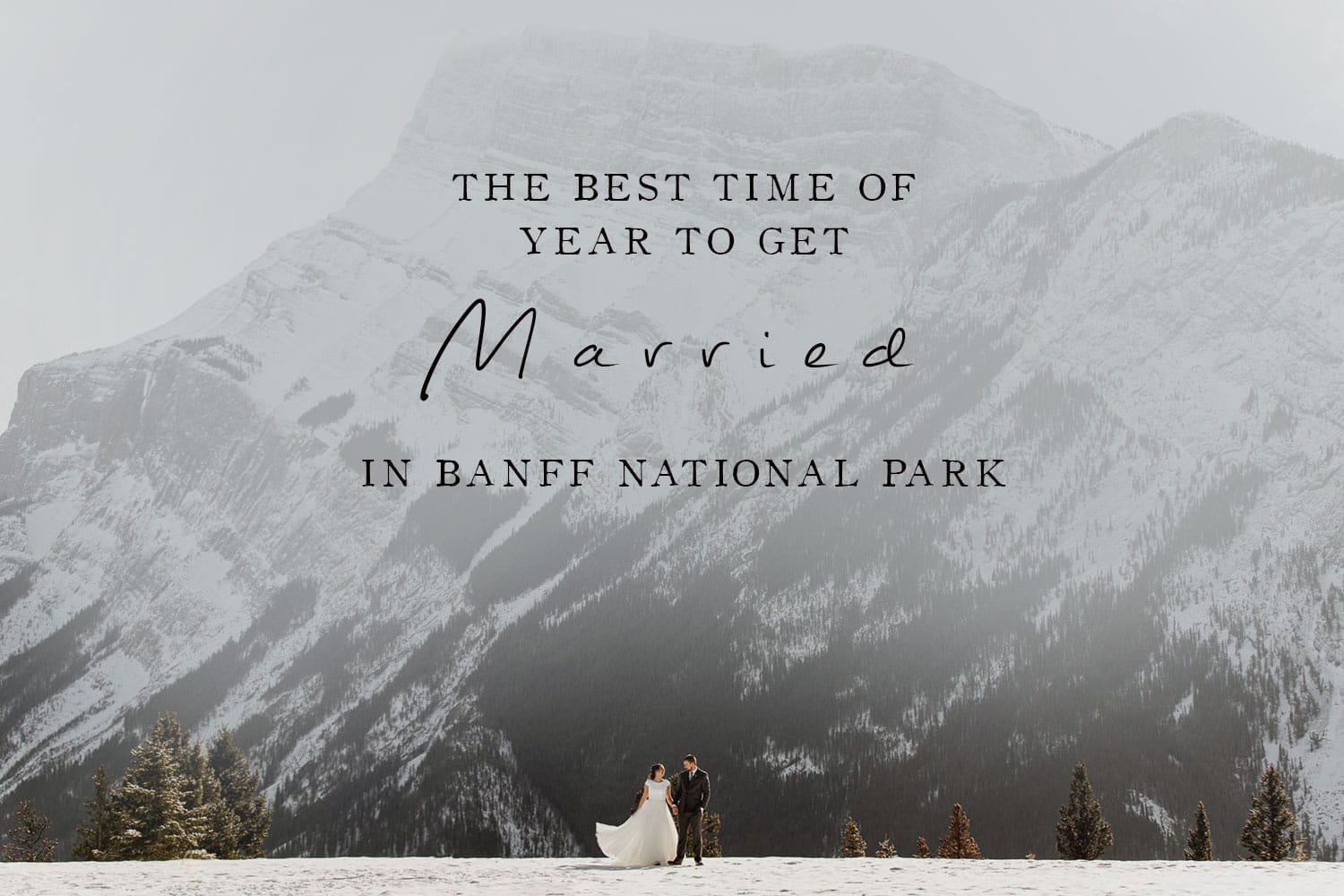 When is the best time of year to get married in Banff? Well, we’ll let you in on a little secret…there is no perfect time to get married in Banff National Park! Each season brings its own beauty and different ways to take advantage of the changing scenery. Whether you’re planning an elopement, a larger wedding or a wild adventure there are so many options based on the time of year in the mountains. Below we have listed each season below to help you decide which might be the best option for you! 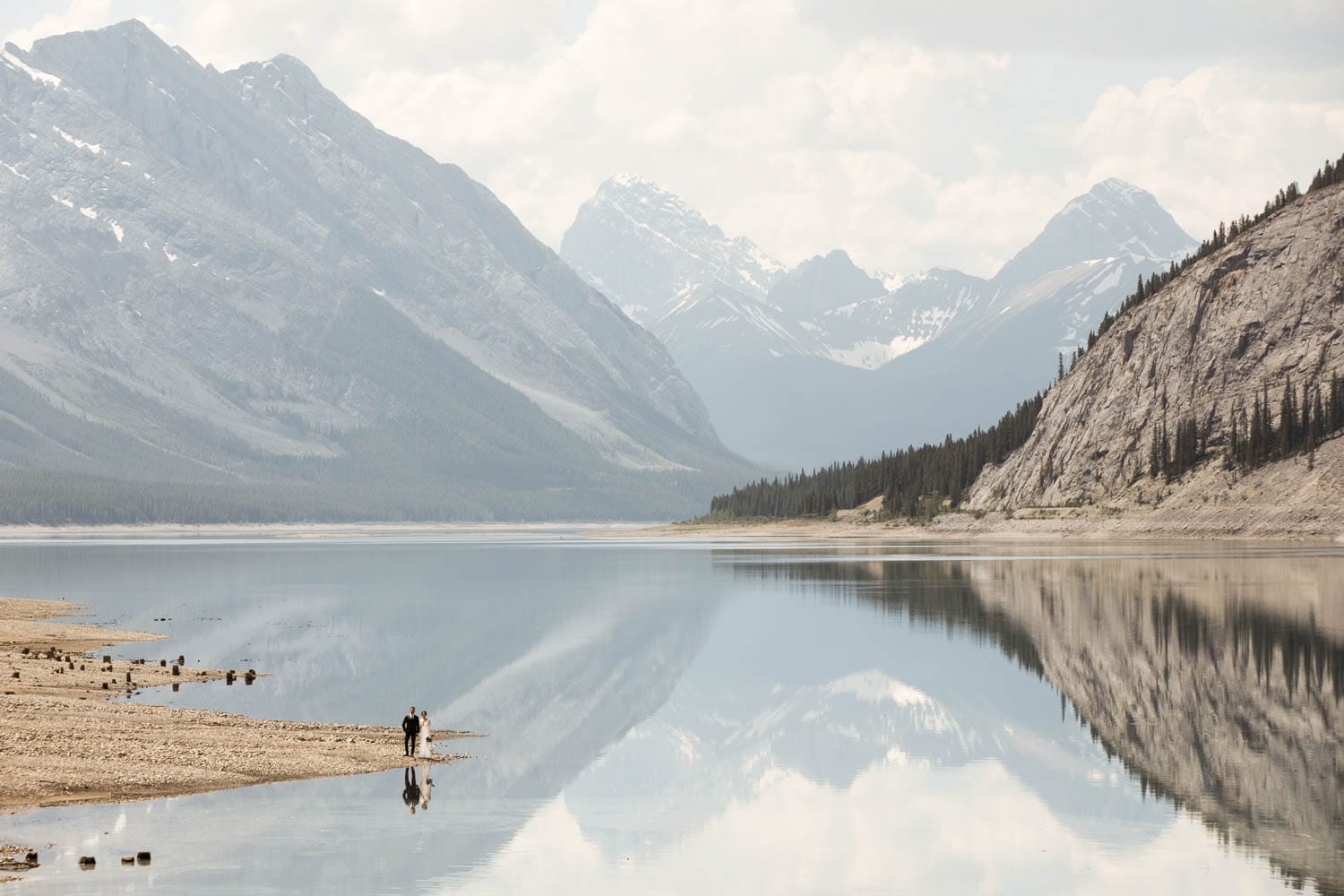 The best time for hiking, camping, getting up to mountain peaks and locations of higher elevation. You will see wildflowers and lots of wildlife. This is also the busiest season in the mountains. The days are long which means sunrise and sunset hours are very early and very late for those who want to take advantage of the best light. Days will be warm and nights can still be quite cool. July is the warmest month, with average highs of 22°C (72°F). It can begin to snow as early as the first week of September (Yes, summer is that short here). Depending on the summer, forest fire smoke may be present during July and August.

Here is some amazing summer weddings we have photographed in the mountains: 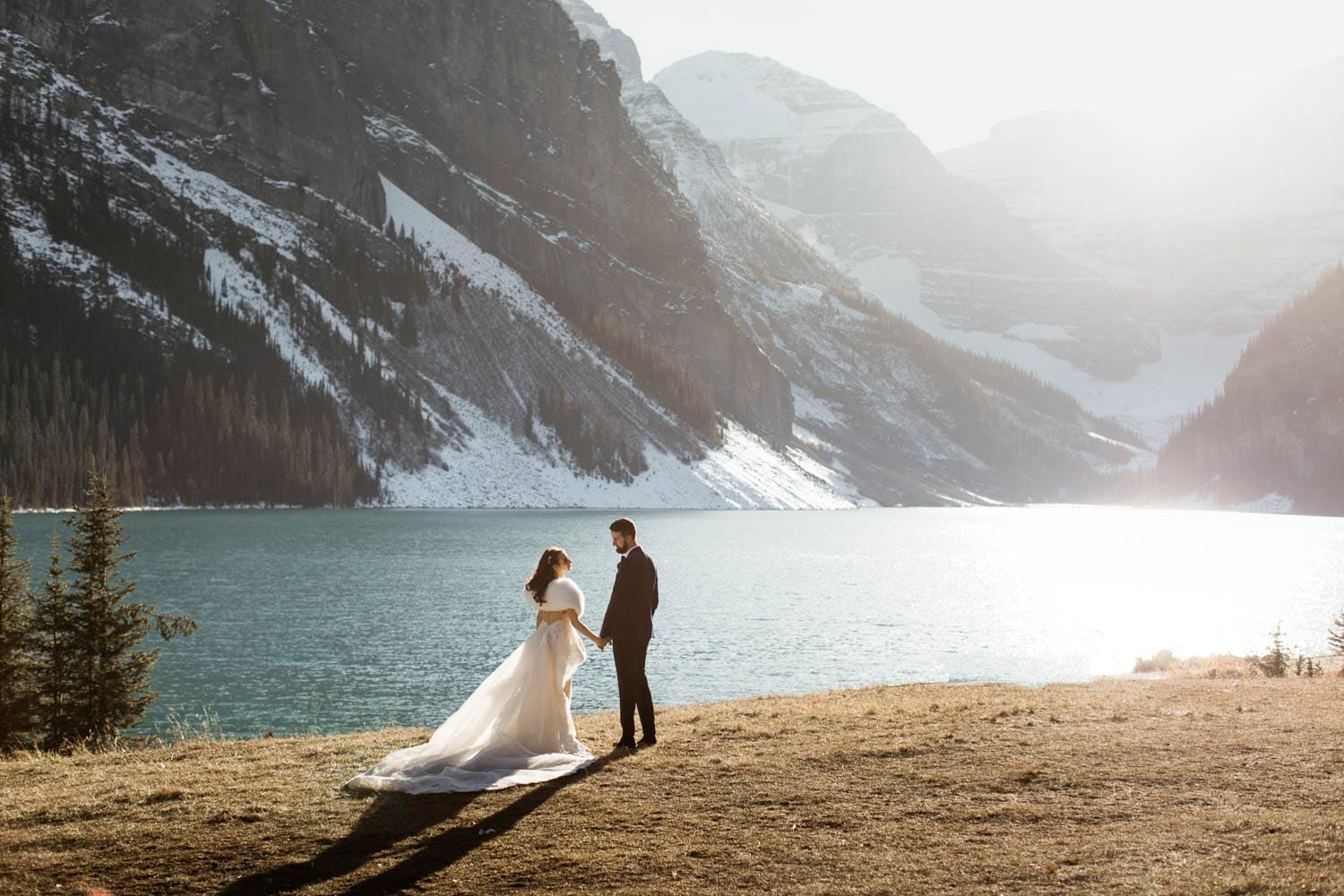 Even though Fall begins in October, you can see colours change in late September at higher elevations as the temperatures drop. The Larch trees are at their peak in late September and early October covering the mountain trails in beautiful orange and yellow colours. Temperatures will begin to dip below 0, especially in the early mornings with frost and leaves falling as early as early October. The days begin to get shorter making it a little easier to wake up for those sunrise shoots. Hiking at higher elevations is no longer possible due to cold weather and avalanche risk.

Here is some amazing fall weddings we have photographed in the mountains: 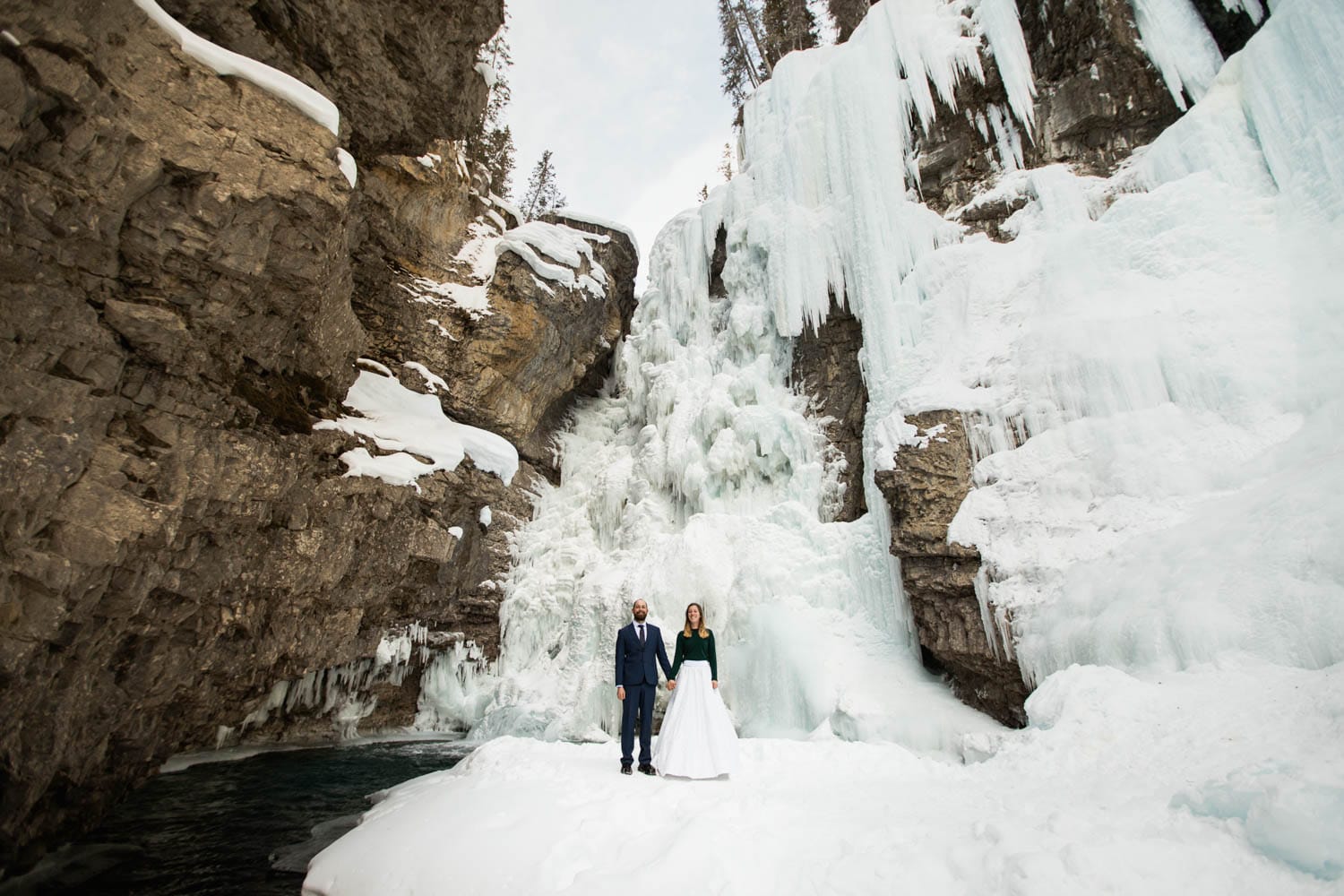 Winter around Banff tends to be very cold and dry but the snow covered mountains are so magical. We do get chinook winds which bring warmer periods through the mountains. January is the coldest month of the year with average temps of -15°C (5°F). This is a great time of year if you want to take advantage of the ski hills in the mountains, experience a winter wonderland, see a frozen waterfall and curl up by a fireplace in a cozy cabin.

Here is some amazing winter weddings we have photographed in the mountains: 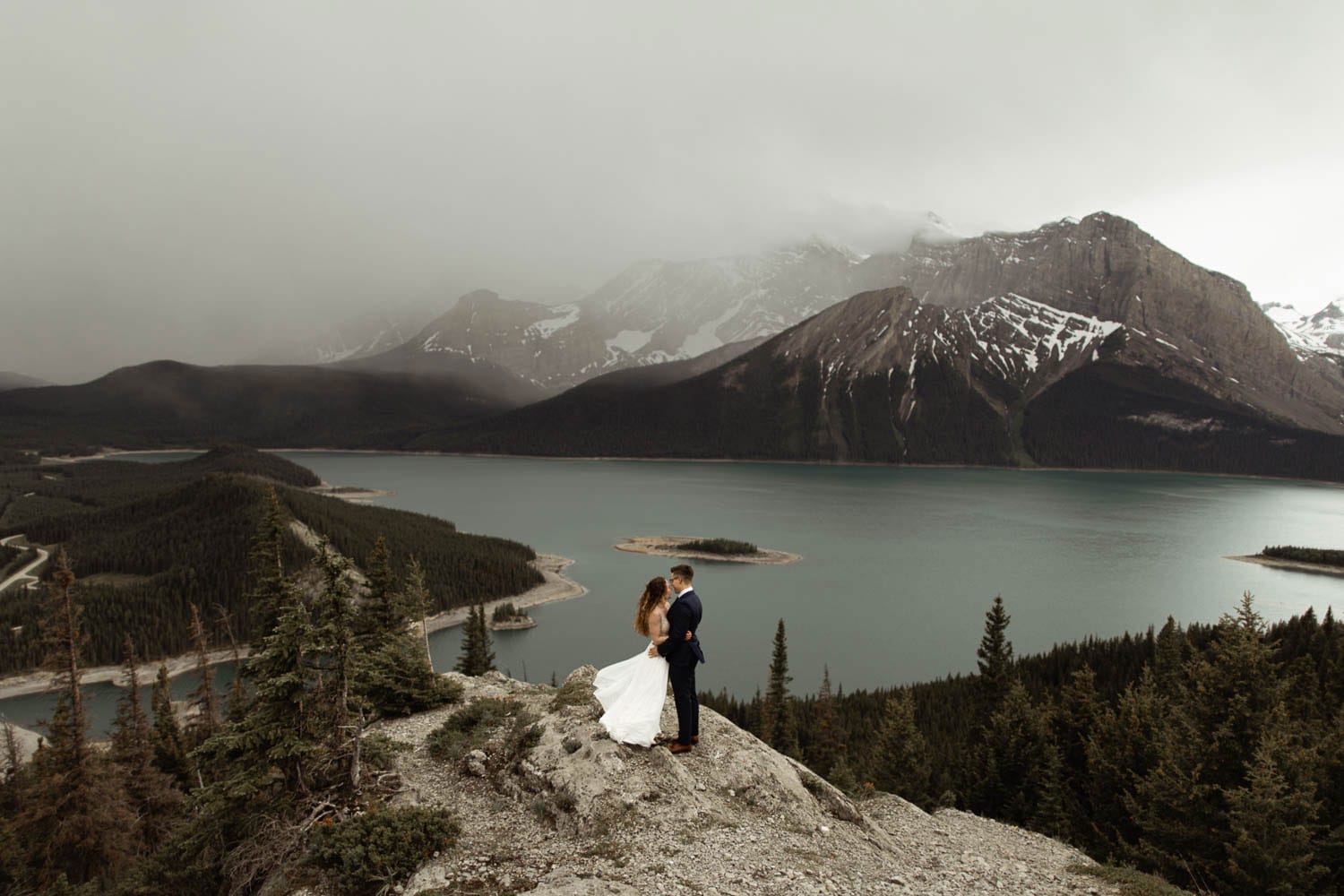 Spring in Banff is a beautiful time of year. The snow is beginning to melt, the trees will begin to bud and the birds and animals start to come out and fill the landscape. Snow will remain on the trails and mountains until late June so if you are planning to hike or camp we would recommend waiting until late June when areas of higher elevation will be free of snow. Summer Solstice is late June when the sun rises at 5am and sets at 10pm but you can always see a light glow of daylight on the horizon.

Here is some amazing spring weddings we have photographed in the mountains:

Visit this site to get more information on seasons in Banff National Park: https://www.banfflakelouise.com/banff-national-park/weather-and-seasons

Want to know more about how to elope in Banff National Park?

Check out our other resources to help you start planning your elopement in Banff, Canmore, Lake Louise, Yoho and Jasper!

How to Plan an Elopement in 10 Easy Steps

How to Elope in Banff National Park – 5 Planning Tips

How to Make an Elopement Day Timeline

Learn More About the Steps to Book Your Banff Elopement Photographers

[…] To find out more about the seasons in the mountains check out our resource blog on the best time to get married in Banff National Park. […] 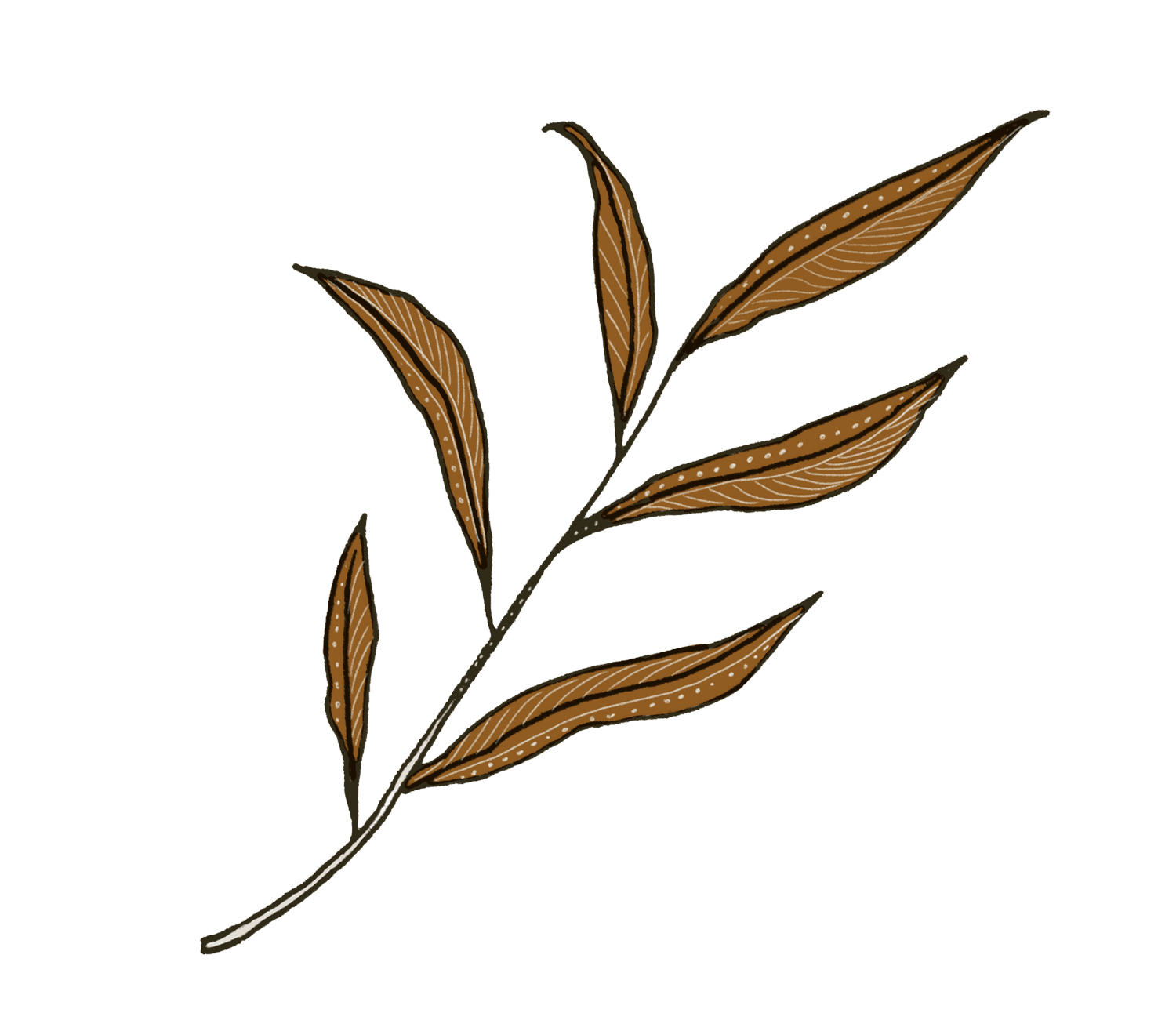